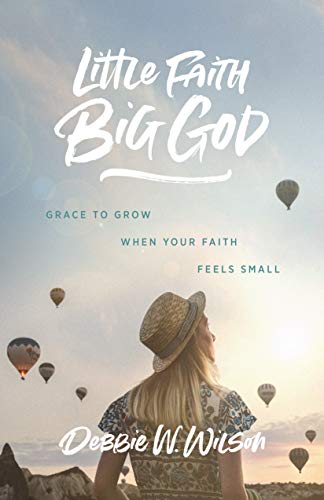 Rhonda Robinson: What was your inspiration for Little Faith, Big God?

Debbie W. Wilson: When my husband and I taught a Sunday school class years ago, we were going through Hebrews 11. We were taking turns teaching, when it was my turn to teach on Hebrews 11, I spent a few weeks on it. And I remember dividing the class into groups and giving them the backstory for them to look at the different people that are listed in Hebrews 11. I had them report back what those people were like.

And every group was stunned.

Looking at who these people were, because somehow, we have elevated people like Abraham and Jacob and all these people into being some kind of super saints, and to go back and see what their lives were like, to see their stumbles,
I think, encouraged everyone.

They began to think, well, maybe God has a purpose for me, maybe he wants to use me. That was years ago, but it’s always stuck with me.

I wanted to write and introduce other people so that they could not only see Hebrews 11 but see the people that God chose to remember. Because what stood out to me was these people were flawed just like we are. But in Hebrews 11, God remembers their faith, not their flops.

Well, as one who can tend to be hard on myself that was really refreshing.

Scripture says, My power is made perfect in weakness. And Paul boasts about his weakness. I’m like, wow, I’m not to that point yet. I can say Yeah. But how encouraging his power? So when I am weak, it says, then I am strong. Well, and I think Hebrews 11 really shows that it’s so exciting, right?

Why is being hard on ourselves not godly or productive? If we’re supposed to strive for godliness?

Wouldn’t it be a natural thing to be hard on ourselves when we don’t quite make it? Well, I think that’s kind of the way we think, isn’t it? But it’s not godly, because it’s not the way God is.

Jacob is remembered he was his name, actually as a schemer, one who grasps the heel. He was a twin, and he was the younger. But he wanted the promise and the blessing that God had given Abraham that was going to be passed down through Isaac’s sons. And so it would go to his older brother and he didn’t. So he schemed, and he deceived his father by dressing up like his older brother. And he tricked his father and he stole the blessing from his brother.

So Esau says he’s going to kill him. And Rebecca, their mother hears about it. So she sends Jacob off. And while Jacob is fleeing that night, he has this dream that comes from God, and he sees this ladder. And at the top of the ladder is the Lord and there are angels going up and down the ladder. God tells Jacob, he’s chosen him to receive the promise and the blessing. Now, what’s so amazing to me, Rhonda, is the timing of this.

This is when Jacob is fleeing for his life because he’s been such a scoundrel. And so you’re thinking, Lord, this doesn’t seem like the right time. Isn’t this kind of rewarding bad behavior?

I don’t know why God timed it this way. Maybe Jacob was at such a low point he was receptive. But whatever the reason. God wasn’t hard on Jacob at that point, we see this over and over again.

When Abraham was afraid, he tells his wife Sarah to pretend that she’s his sister, not his wife. Because he wants to protect himself. It ends up putting Sarah in a harem of a king. Now, I don’t know how long bridegrooms usually wait to consummate their marriage, but it really puts Sarah in a bad place.

He doesn’t reprimand Abraham, he lets the pagan king do that.

So you know, it’s hard to break, but it’s not godly or productive, to be hard on ourselves.

RR: So God commended Noah, Enoch, and Abraham for their faith. Can you tell us more about how they demonstrated their faith?

Debbie W: Yes. Noah, probably was not a carpenter, and so to be told to build. Many believe that it had never rained at this point it was more like a terrarium, and so he didn’t even know what rain was let alone a flood. And he lived in a time where it says he was the only righteous person. There were no Bible studies. There were no churches, there were no Christian group lunches. He was alone. And he believed God and obeyed for 120 years.

He hammered, and stood, and built that Ark.

He preached righteousness. The New Testament says he was a preacher of righteousness. And when it came time to board the ark, he had only his family, no neighbors, nobody after 120 years of listening to him preach God on the ark. But his family did and through his family, he saved, well, us. We’re here today. And so I think, to continue for 120 years when you’re being mocked and scoffed, and you are seeing no fruit of your ministry. I think, you know, that was a real act of faith and God commended him. Even though he didn’t see in his life.

5 Cleaning Tips to Spruce Up Your Relationship

How to Listen With Your Heart

Debbie W. Wilson is an experienced Bible study teacher, ministry leader, and speaker. She has over 35 years of expertise, training, and teaching in the areas of relationships, Bible study, counseling, and discipleship. She and her husband Larry founded Lighthouse Ministries, a nonprofit biblical counseling, coaching, and Bible study ministry. Find free resources to refresh your faith and connect with Debbie at DebbieWWilson.com.

Rhonda Robinsonis a speaker and the author of Freefall: Holding Onto Faith When the Unthinkable Strikes, offering women spiritual wisdom to transform the darkness into a season of profound change and emerge with vision and purpose. Learn more atRhondaRobinson.tv

If you would like one of our anointed prayer ministers to support you as you lift your voice in prayer, please click on the link below.

You can watch our powerful programming on either Roku, Apple TV, Amazon Fire, Chromecast, via livestream at ini.tv/livestream, or on the Inspiration TV mobile app — click here for all the ways to watch!

Is Work a Curse or a Blessing?

The Love of a Mother

Many of us have witnessed the love God has for us. We’ve seen it mirrored in the eyes of a mother. We can see it...[MORE]